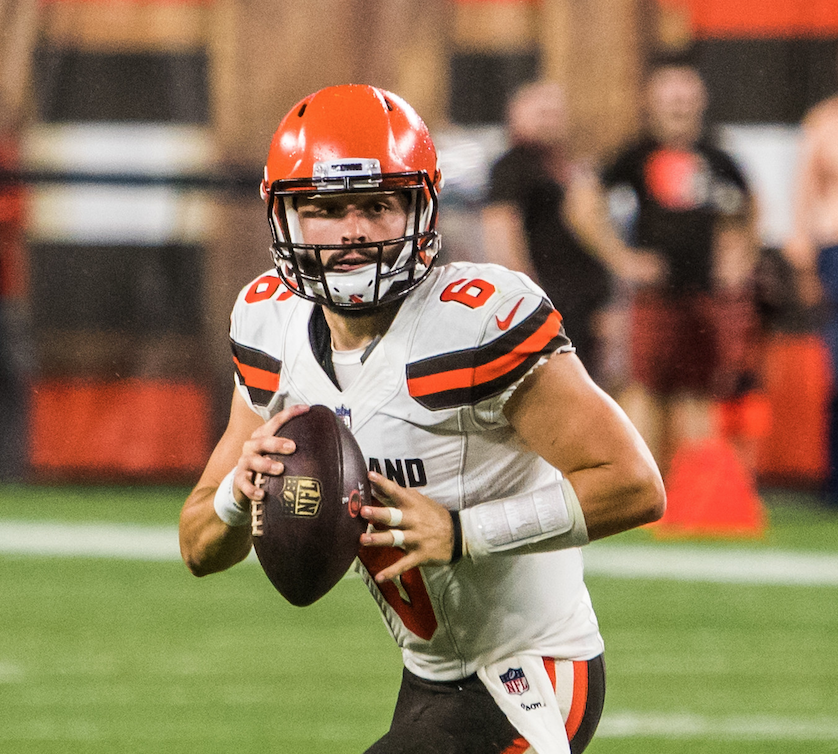 On Monday, the Cleveland Browns and the Baltimore Ravens clashed in what turned out to be one of the most exciting football games of the entire 2020 season. Not only did the game tie an all-time record for most combined rushing touchdowns by both teams, but a handful of lead changes and some thrilling in-game storylines made for a nail-biting, edge-of-your-seat-type game that kept fans captivated from kickoff until the final play.

If you’ve been following football for the past 20 years, you might be shocked to hear that the Browns played competent football against a team like the Ravens, but that’s where we are in the NFL today. While not many kind words can be said about their defense this season, Cleveland’s offense put up a whopping 42 points against a Baltimore club that’s allowed more than 30 points just once all year. That lone blemish was a 34-point performance posted by MVP frontrunner Patrick Mahomes and a Chiefs offense that’s easily been one of the best in the game.

Sure, the Browns defense gave up 45 points (and the offense allowed two more due to a desperation play that ended in a safety in the game’s final minutes), but Baker Mayfield and the rest of their talented offense made a solid Ravens defense look like a wet paper bag. So what’s the deal here? What are we supposed to believe about Cleveland? Are they actually a good team for the first time in ages? They’re 9-4, and have already clinched their first winning season in 13 years, after all.

What Does “Good” Mean, Anyway?

There’s no simple answer for this, for a few very obvious reasons. First off, the idea of “good” is relative. Are the Browns good compared to the Chiefs? No, I wouldn’t say so. But are they good in comparison to the rest of the league? That’s an entirely different question. Second, “good” is subjective. There’s no firm universal set of criteria to measure whether a team is good or bad.

That said, I’m going to insert my big fat opinion in here anyway, because for the purposes of this article it’s not really worth it to hire a panel of football pundit judges and reel off an American Idol-style deliberation process. So I’m going to run with my best judgment, and run on the premise that most fans would consider the Browns “good” if they were capable of making a deep, meaningful playoff run. If, for example, they were able to make it all the way to the AFC Championship game, I think that would validate their talent and get most people to nod in agreement that they are a good team, even if they lose that matchup.

So I think we can be more specific, and ask whether the Browns have a reasonable chance of making it to the AFC Championship game this season. There’s not really any science behind that gauge, but it’s probably an appropriate one nonetheless. So I’m going to examine several important X-factors for the team, and try to come up with an honest estimation as to whether Cleveland has what it takes to climb out of the divisional round.

Mayfield is a subject of debate around the league. ESPN personalities such as Colin Cowherd and Stephen A. Smith are pretty adamant that he’s not only a huge draft bust, but barely deserving of a starting quarterback job at all. However, head coach Kevin Stefanski has been clear all year long that as long as he’s healthy enough to take the field, Mayfield is their guy. And with the unusual amount of winning the team has been doing all of a sudden, they won’t likely be drafting high enough next year to grab a sure-thing quarterback prospect, anyhow.

There’s absolutely no denying that Mayfield has high-ceiling potential. When he wakes up feeling dangerous on a given day, he’s capable of obliterating opposing defenses, particularly when both of the team’s elite running backs are healthy enough to make the threat of a run intimidating (more on them later). We’ve seen at least two instances this year in which Mayfield threw for four touchdowns in a half, and even if he wasn’t impressive in the other half of those games, it’s a clear indication that Baker is 100% capable of catching fire.

I’ve seen all sorts of excuses from Cleveland fans about why he’s had a mediocre season on the whole. Everything from “his ribs hurt”, to “the sun was in his eyes”, to “it was too cold that day”… you know, those types of things. But the one common rationale for his slow start that makes some sense is that he’s a fourth-year quarterback playing in his third offensive scheme, and it was probably just going to take him some time to get used to the newest playbook. I sort of wrote it off for a while, but after seeing Mayfield go off for over 700 yards and seven touchdowns in the past two games, I’m starting to wonder whether that excuse might hold some real merit.

The fact that he threw for more yards against the Ravens than any QB this year not named Mahomes isn’t nothing. Make no mistake, if the Mayfield we’ve seen lately is the real Mayfield going forward, the Browns are a threat to score on any given drive. That, of course, would imply that they’re good.

The Browns have the best running game in the league, and by a wide margin in my opinion. Nearly every Fantasy Football pundit I’ve read this week lists Nick Chubb as one of the top three running backs moving forward, and if you watch what he’s capable of on the field, you’ll probably agree. The dude is a walking tantrum waiting to viciously throw opponents onto the ground.

The fact that the team also has Kareem Hunt, then, is an embarrassment of riches. Hunt also ranks inside the league’s top ten in total rushing yards, and five touchdowns to go along with those yards despite playing second fiddle to Chubb for the majority of the season.

Individually, each of those players is a significant threat on the gridiron. As a unit, they’re terrifying. Of all the teams in the NFL, only the Ravens and Titans have more rushing yards on a per-game basis than the Browns, and that’s in spite of Chubb having missed several games. The Browns are a formidable force on the ground, and that alone makes them a serious contender.

The Browns were probably a lot better off with Odell Beckham Jr. still healthy, but even without him they’ve managed to do well the past several games. Jarvis Landry has heated up big time and plays every game as though the opposing team is holding his entire family hostage and won’t release them unless the Browns win. He gives everything he has each and every time out, and has been Baker’s most consistent receiving weapon.

Rashard Higgins, Austin Hooper, and Donovan Peoples-Jones round out a receiving corps that’s not elite on the whole, but has at least given Mayfield enough to work with across the past few weeks and has continued to improve as time goes on. Combine that with Kareem Hunt’s respectable receiving talents and David Njoku’s ability to catch a few passes on occasion, and you have the makings of an above-average crew.

I don’t think I’m surprising anyone when I say that Cleveland’s red zone defense is the football equivalent of that tape you see at the finish line of a race; it basically breaks apart right on contact. As we saw in Week 14, Lamar Jackson and the Ravens running backs were able to beat them almost on their own by running right through them for five rushing touchdowns.

If you look at total yards against the Browns, they rank in the middle of the pack among NFL teams. But the fact that they’re entirely impotent when it comes to stopping opponents from scoring has resulted in a massive hill for their offense to climb on several occasions. Teams have scored an average of 28.3 points per game against Cleveland, which puts them at 27th place among 32 teams. Bluntly put, the Browns suck at preventing scores.

So… Are They Good?

Outside of the areas I described above, the Browns are solid if unspectacular as a team. They have a decent enough offensive line, pass rush, special teams, etc., so what this boils down to is whether their offensive talent significantly outweighs their defensive incompetence, and as I said pretty much from the outset, that depends on whether Mayfield’s recent performance is something we can expect moving forward.

His most recent opponents, the Titans and Ravens, are 29th and 16th against the pass among NFL teams, respectively. So there’s reason to doubt whether it’s “real”. But it’s not as though he was simply above average in those games, either. He and his receivers rocked those teams. I think it’s fair to cautiously give the Browns’ passing game the benefit of the doubt, and in doing so I’m willing to give them a firm 8/10 and say they have a shot at making the AFC Championship game this season. In short, the Browns are finally good, and their fans might want to prepare for the unfamiliar experience of what it’s like to win.