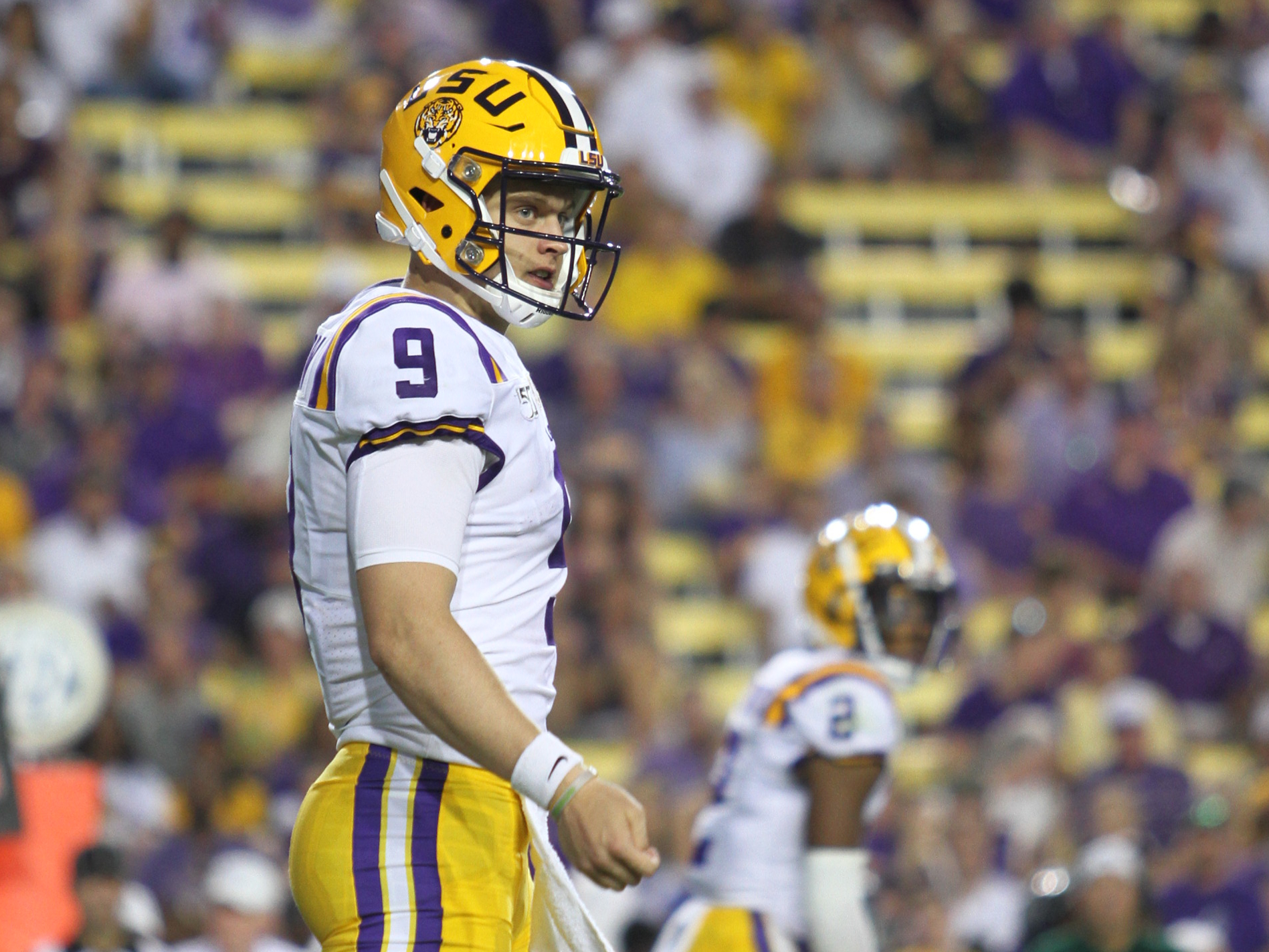 The Bengals and their fans have a future to be excited about. Since the organization selected LSU quarterback Joe Burrow with the number one overall selection in the 2020 NFL draft, the rookie has been lighting the world on fire with his strong, accurate arm. He’s compiled nearly 2,500 passing yards in just nine games of pro football, while throwing 12 touchdowns and completing over 65% of his passes along the way. As the team gets better around him, Burrow seems likely to keep getting better and better, and fans are getting attached. Many of them are wondering whether Joe Burrow has a nickname that’ll catch on at some point.

So far, Burrow doesn’t have an official nickname, but many fans have been calling him “The Tiger King”. That one seems most likely to stick, though that hasn’t stopped fans from continuing to throw out alternatives (many of which are pretty clever).

I did a ton of digging on the web to find the best nicknames that Cincinnati fans have come up with so far, along with a few that were suggested during his days at LSU. They range all the way from excellent to atrocious, so I decided to rank them in order from worst to best. Spoiler alert, “The Tiger King” tops this list, and I’ll explain the avalanche of brilliant reasons why once we get to that point.

This one is clever and funny. The -eaux pays homage to Burrow’s LSU roots, where of course there’s a constant joke of replacing the “oh” sound with the french phoneme. One of the most famous examples of this is when fans hold up signs that say “geaux” in order to cheer on their Tigers.

As funny as the joke is, though, many in Louisiana feel that it’s played itself out by this point. That’s understandable, considering it’s been around for decades, after all. That’s one small reason the nickname is last on this list, though there are two even more significant reasons why it’ll probably never catch on.

The first of those reasons is the obvious fact that Burrow doesn’t play at LSU anymore; he plays for the Bengals. So why would Cincinnati fans use a nickname that references his college football origins, particularly several years from now? The second reason is even more of a killer: the clever spelling doesn’t come through when you say the nickname out loud. Not only does that ruin the joke for fans, but it makes it useless for sports announcers, too.

This was something dreamed up on Twitter and later published on an SB Nation blog back during Burrow’s LSU days. There was one other solid nickname mentioned in that article (which I’ll get to later on in this list), but for the most part, they were pretty terrible, so I’ll spare you from having to wince at them.

The idea behind this moniker was that it subtly references the quarterback’s last name. Apparently, the wombat is nature’s largest burrowing mammal, and thus a fitting one by which to brand Joe Burrow. However, the obvious problem with this nickname is that when you think of a wombat, you don’t think of it as being particularly athletic. It’s just kind of a big fat rodent that lives in the outback; it’s not cool, it’s not terrifying, and it’s certainly nothing for an opposing defense to fear.

So while there was certainly thought put into this nickname, it seems as though someone might have been trying too hard. I can practically see the wheels turning in that LSU fan’s head as they searched Google to find out the biggest animal that lives in a burrow.

This one made me chuckle, and not just because I was born in the Buckeye State. Whether intentional or not, it’s a subtle reference to an episode of Family Guy in which Peter establishes his property as the country of “Petoria”. He eventually takes over his neighbor Joe’s backyard, and names it “Joehio”.

Of course, the more obvious purpose of this moniker is to reference the fact that he plays in Cincinnati, just north of the state’s southern border. But the relevance of the nickname doesn’t end there. He also attended Athens high school in The Plains, Ohio, where he led his school’s team to their first seven playoff wins ever. He also played college football at the Ohio State University for three years, though he ultimately transferred to Louisiana after being unable to win the starting QB job in Columbus.

As simple as it is, I could see this nickname catching on. It almost implies a sort of homecoming story, and who doesn’t love a narrative like that? There’s also beauty in the simplicity of it, and it doesn’t make you think too hard. And of course, three-syllable names are great for chants.

This is the other nickname from the LSU Tigers fan page at SB Nation. I actually didn’t quite get it at first, but as I looked into it I realized it was a reference to a song called Stuart by a band named The Dead Milkmen. For those who don’t know, it’s a spectacularly bizarre song like something you’d hear when listening to the deep tracks in a B-52’s album, and there’s a long section where the guy talks about wanting a burrow owl.

The cleverness of the nickname sort of ends there, though. A burrow owl is a fascinating creature considering it’s one of the only flying animals that burrows, but beyond that, we run into several of the same issues we had when discussing “Wombat” as a nickname for the rookie sensation. Unless you’re a field rodent of some kind, a burrow owl doesn’t pose any serious threat. They’re very cool silent predators, but they’re more beautiful than they are intimidating.

In case you were wondering, there are no burrow owls in the state of Ohio. In fact, they don’t even live in the midwest at all. According to the National Wildlife Federation, they tend to be found mostly in Florida, Mexico, and parts of South America. All things considered, it’s tough to imagine this nickname catching on unless there are a hell of a lot more Dead Milkmen fans in Cincinnati than I realized.

This one is pretty great, actually, and I was torn over whether to put it number one over The Tiger King. It’s a killer reference to his last name, as “burrow” would typically imply that an animal is digging through dirt or mud, and it pays homage to a classic cult film by the same title.

The movie Joe Dirt is about a white trash loser who’s the janitor at the Los Angeles Radio Station. After being pulled on the air and talking about himself for a bit, he finds fame thanks in part to his good-natured self-deprecation, and wins over a few friends in the process. Considering all this, Burrow himself might not appreciate the nickname too much, as it’s unlikely he wants to be compared to the lead character in the film.

Still, maybe Burrow is a good sport and would embrace the moniker. After all, it’s catchy, it’s short, and again, it’s a brilliant way to reference his last name. And who knows, maybe he just happens to be a fan of the movie! I’m almost tempted to start pushing it on Twitter and see what happens.

This nickname is so multifaceted it’s almost too perfect. But before we even talk about why it works so well, can we just take a moment to appreciate that “Tiger King” is a glorious nickname for a quarterback? Sure, its power is kind of diluted by the hilarious and barely believable Netflix documentary by the same name, but regardless, it’s a fitting name for a dominant QB like Burrow.

The meaning behind the nickname is obvious on the surface. Burrow, of course, plays for the Cincinnati Bengals. And if any position on the field should be dubbed the “king” of a team, it’d be the quarterback. But this goes even deeper, considering Burrow was drafted out of Louisiana State, where the team name is “Tigers” and the school mascot is Mike the Tiger. So Burrow is also the king of playing for Tiger-themed teams.

The icing on the cake here is that Burrow’s first name is Joe, meaning he shares a given name with the star of the Tiger King documentary series, Joe Exotic. Like Joe Dirt, it’s not exactly flattering to be compared with Joe Exotic, but in this case the actual nickname Tiger King is cool enough that it doesn’t really matter. It’s clear why this moniker flooded Twitter on the night of the 2020 NFL draft, and there’s a good chance it’ll catch fire as Burrow’s career continues to take off.