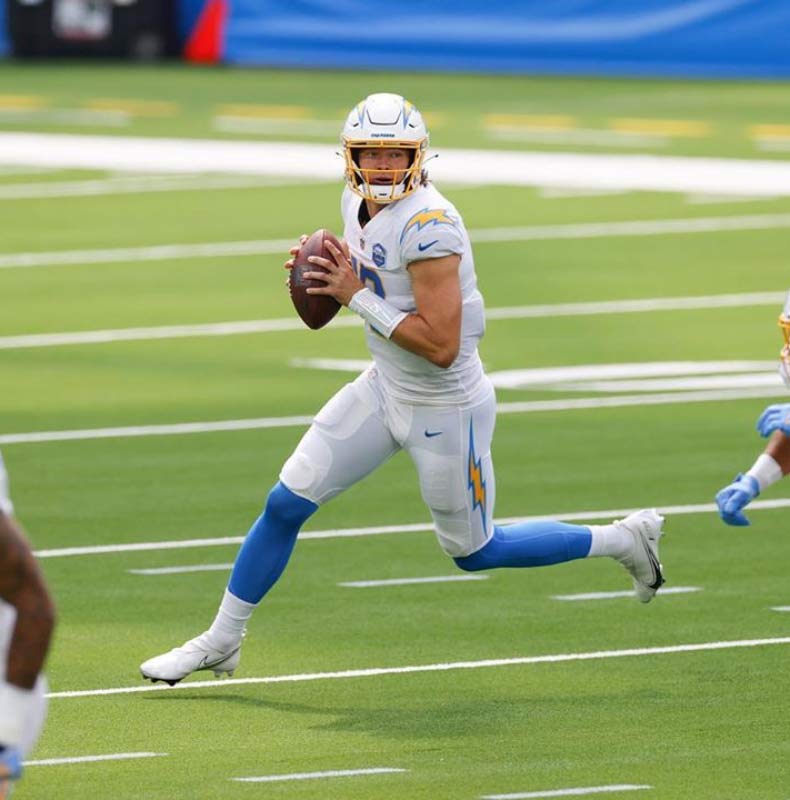 Headed into Week 8 of the 2020 season, Chargers rookie quarterback Justin Herbert has turned some heads with this ability to chuck the football deep. Though the Chargers are only 1-4 with him behind center, the University of Oregon product has dominated opposing defenses, averaging 2.4 touchdowns and over 300 passing yards per game.

Herbert’s promising early showing has given the Chargers fan base a reason to be excited about the future of their franchise. So excited, in fact, that they’ve been brainstorming for over a month to try and come up with the perfect moniker for their new signal-calling hero. Sportscasters, Reddit users, and plenty of others have ideated an avalanche of clever suggestions, but nothing has stuck.

So while Herbert doesn’t yet have an official nickname, I’ve compiled a list of the ones with the most momentum, along with a someone uninspiring suggestion from Herbert himself. They’re listed in order of my personal favorites, with the best saved for last.

Yup, you read that right. The only reason this particular nickname earned a mention is because it’s reportedly one that Herbert himself suggested, and the report even uses a lower-case “h” to make it even less noteworthy. The connection to his last name is obvious, but would it really be something that catches on with fans?

Then again, it’s entirely possible that he wasn’t entirely serious when he suggested it. NFL players, especially quarterbacks, generally have more important things on their mind in a given moment than what nickname they’d like to be given, and if Herbert didn’t have the bandwidth in a particular moment to try and be creative, it would make sense that he’d say something simple and obvious in an effort to get a reporter off his back. It’s even possible he was trolling. Either way, this moniker seems unlikely to catch fire.

Born off of the r/Chargers forum on Reddit, this one pays homage to the sixth and final installment in The Love Bug film series. Though there’s no other real connection between Herbert and the anthropomorphic automobile, the nickname is pretty clever in that it indicates the rookie’s dangerous throwing arm is always locked and loaded.

Despite the fun coincidence, though, the moniker is flawed and probably won’t latch on. First and foremost, it’s pretty long for a nickname, which makes it less convenient to say and a little less catchy than something shorter. That in and of itself isn’t a deal-breaker, of course, but there’s one other factor at play that probably is: cool nicknames generally don’t have a colon smack dab in the middle of them.

Herbert’s hair game is wicked strong, and went on full display in his print ad for Bose headphones on the eve of the NFL draft. He’s also a known sponsor of the Head & Shoulders shampoo brand, and has endorsed the product publicly at least once. It’s no surprise that several fans made the connection and started calling him “Hairbert”.

When asked about his hair on the Pat McAfee show earlier this year, Herbert responded by saying, “The past few years, I’ve realized how much work it is and fortunately Head & Shoulders sends me enough products that I’ve been able to take care of it.” The lone flaw with this nickname is that it’s not great to describe him on the football field, since that hair will usually be covered by a helmet.

Speaking of Pat McAfee, the sports analyst and podcaster has taken to calling the Chargers quarterback “Air Bear”. Because of McAfee’s large audience and popularity among football fans, this nickname has probably gained the most traction and might have a good chance to stick if he keeps pushing it.

Unlike the other nicknames on this list, this one is multilayered. On the surface, it seems to reference Herbert’s penchant for “airing it out”, or throwing the football a long way down the field. But when you speak the moniker out loud, you’ll notice that it’s also the french pronunciation for “Herbert”. Pretty clever, right? Unless someone comes up with a slam dunk alternative across the next few weeks, the nickname “Air Bear” probably has the best chance to catch on with NFL fans everywhere.