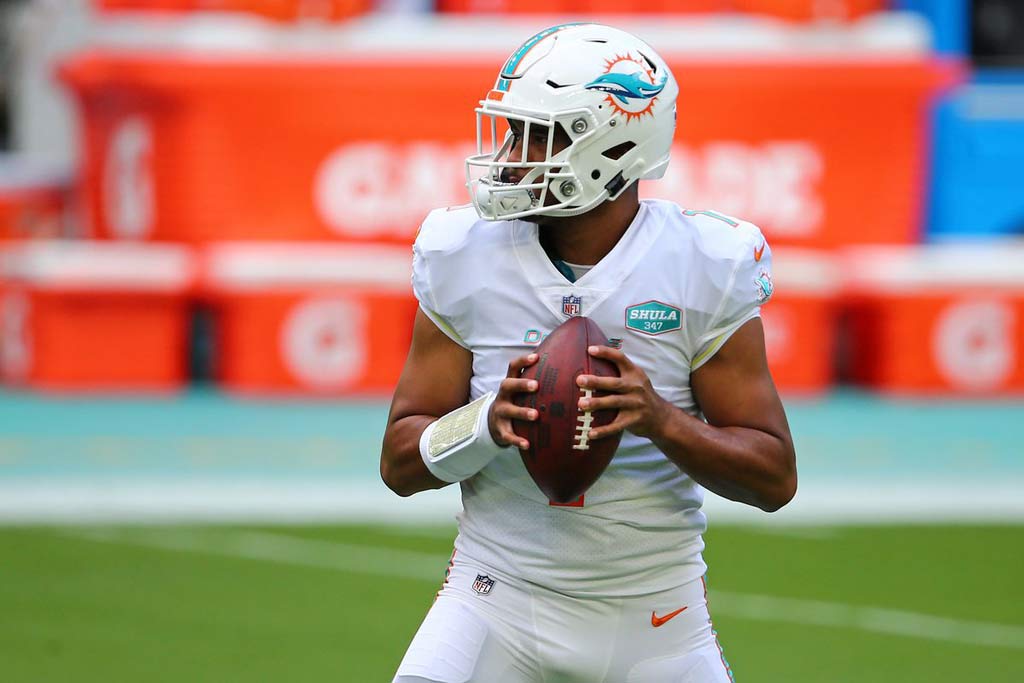 On Sunday, October 18th, Tua Tagovailoa made his pro debut by completing two passes for nine yards in garbage time against the New York Jets. By doing so, he became the first left-handed QB to throw a pass in the NFL in nearly five years (the last being Cowboys second-stringer Kellen Moore). That means there have been a total of 33 left-handed NFL quarterbacks who played in at least one game.

Tagovailoa is slated to take over as the starting QB in Miami on November 1st, and figures to be a fixture in Miami for a long time. Here’s a list of every lefty quarterback in NFL history leading up to the Alabama product, listed chronologically in order of debut.

Some still consider Albert to be the best left-handed quarterback ever to play the game, though that may be a tough case to make with two of them in the Hall of Fame. At just 5’9”, the 1948 co-MVP is quite small, at least by today’s QB standards.

Baker was definitively a backup QB; while he played 18 games across a three-season career, he only actually made four starts for the Rams. Because he was drafted number one overall, many consider him to be the first major bust in NFL history.

Douglass was a versatile quarterback, and set a record for rushing yards by a QB in a single season, which remained intact for 34 years. He even managed to score four rushing touchdowns in a single game back on November 4th, 1973.

Only two left-handed quarterbacks are in the Pro Football Hall of Fame, and Stabler is one of them. Despite throwing more interceptions than touchdown passes, he compiled a record of 96-49-1 across his 15-year career, and accrued nearly 28,000 passing yards.

There aren’t many great things to say about Del Gaizo’s career. He spent three seasons with three different teams and played in just 16 games, going 1-5-0 in the six games he started. With just four passing touchdowns and ten interceptions, history has forgotten this lefty.

Morrison’s career was even less noteworthy than the man before him on this list. He lasted just one season in the NFL, and threw 51 passes for 21 completions over the course of three dismal games with the 49ers. He amassed just 227 passing yards.

Humm was a serviceable backup quarterback over the course of his 10-year career. He played in 95 games for three different teams, but made just one start (a loss) in 1981. Fun fact: he threw three touchdown passes in his career, and they all came during his rookie season.

Though he never earned any major honors or even a pro bowl selection, Zorn was still a pretty decent quarterback, and certainly one of the better left-handed ones. His 111 career touchdowns and 21,000 passing yards speak volumes, even if he lost more than half his starts.

As a fourth-round pick, McDonald was probably never intended to be much more than a solid backup quarterback in Cleveland, and he was exactly that. But he did start all 16 games for the Browns in 1984, completing 271 of 493 pass attempts for a total of 3,472 yards.

Aside from having the best name among left-handed quarterbacks, Boomer was also one of the better ones to set foot on a gridiron. He played in the NFL for 14 seasons and earned four Pro Bowl selections, including one First Team All-Pro honors.

There’s a pretty solid consensus that Steve Young is the best left-handed quarterback of all time, and he was also the first lefty to be inducted into the Hall of Fame. Still, many fans forget that it took seven years for him to really get going, which might create some wiggle room for fans of Stabler to make their case.

As another backup quarterback on this list, Willhelm never saw very much action outside of garbage time. He played in 22 games, and made one start (a loss) in which he threw zero touchdown passes and two interceptions.

Carlson, a Long Beach California native, was actually drafted by the Los Angeles Rams in the first round of 1989, but didn’t find a chance to throw his first pass until he put on a Bucs uniform the following season. Ultimately, he played in just seven games.

After spending a few years as Dan Marino’s backup, Mitchell actually went on to find a starting gig with the Detroit Lions, where he ultimately had a few excellent seasons. In ‘95, he set franchise records by throwing for 4,338 yards and 32 touchdowns, which held up until Matthew Stafford broke them a couple decades later.

1991 marked the first year in NFL history in which two different left-handed quarterbacks made their professional debut. Marinovich’s career proved to be underwhelming in comparison to Mitchell’s, though, as he played just 8 games due to substance abuse issues.

After being drafted in the fourth round in 1992, Furrer got two chances to show his stuff late in the season. After completing just nine of his 25 passes, he didn’t turn many heads, and had to wait another three years before getting another opportunity on the gridiron, which also went poorly en route to an early retirement.

Brunell actually had the longest career of any left-handed quarterback to play the game, and he had some pretty impressive seasons throughout his 17-year NFL career. Brunell played for five different teams and accumulated over 32,000 passing yards.

You probably haven’t heard of Doug Nussmeier, because he only played in five NFL games and threw just a single touchdown pass over the course of his two-year career. After throwing three interceptions and no touchdowns in 1997, he never got to play again.

Matthews was mostly an afterthought in the 1994 NFL draft. He was taken by the Chiefs in the seventh round, and never got a chance to play for his original team. He finally saw the field three years later with the Jaguars, but he played a mere three games in total.

Graziani was another seventh-round pick, and endured a pretty dreadful career. Over the course of three pro seasons, he played in 18 games (five stars), and threw eight interceptions to go along with just two touchdowns.

McNown’s career definitely didn’t measure up to his high draft status (or his fantastic name). He was taken twelfth overall by the Bears in 1999, but played in seven disappointing games before suffering a shoulder injury. His second and final NFL season with the Dolphins was no better.

The first left-hander to make his debut in the new millennium, Huard would go on to play just eight games across three seasons… a much less successful career than his brother, Damon Huard.

Remarkably, the Seahawks had two lefty quarterbacks make their NFL debuts just a few weeks apart. Lytle was signed as an undrafted free agent, and never really caught on in the NFL. He played just five games between the Seahawks and the Panthers.

Ragone started two games during his rookie season, and completed 20 of his 40 passes for a mere 135 yards. It was his lone NFL campaign.

After being drafted in the third round by the Tampa Bay Buccaneers in 2003, Simms played in parts of five NFL seasons with three different teams, going 7-9-0.

All things considered, Leinart was a pretty significant bust for the Cardinals. After being taken tenth overall, he played four underwhelming seasons for them before moving on. He’s now a FOX sports studio analyst for college football.

The heavy-set Lorenzen had some funny nicknames, such as The Hefty Lefty and the Pillsbury Throwboy, but that’s about all there is to talk about in regards to his career. He appeared in four games and never made a start.

White’s story is interesting, if only because he was utilized both as a quarterback and wide receiver in his lone professional season. He attempted only five passes, and was waived the following year.

Though he certainly gained a lot of media attention for his religious expression and signature pose, Tebow’s NFL career was short and mostly uninspiring. He eventually went on to pursue baseball with the Mets organization.

The Saints were the first team to sign Palko as an undrafted free agent, but he was cut shortly after. This happened with a few different teams before he finally played an NFL football game with the Chiefs; eight games in two years, in fact.

Though he was active for six seasons in the NFL, Moore only played in three games, all of which came in 2015. He retired in 2017, and is now the team’s offensive coordinator.

After leading the University of Alabama to a National Championship, Tagovailoa earned a draft selection at number five overall. His debut snapped what was nearly a five-year streak of no left-handed QBs in the NFL, the longest such streak in over 50 years.