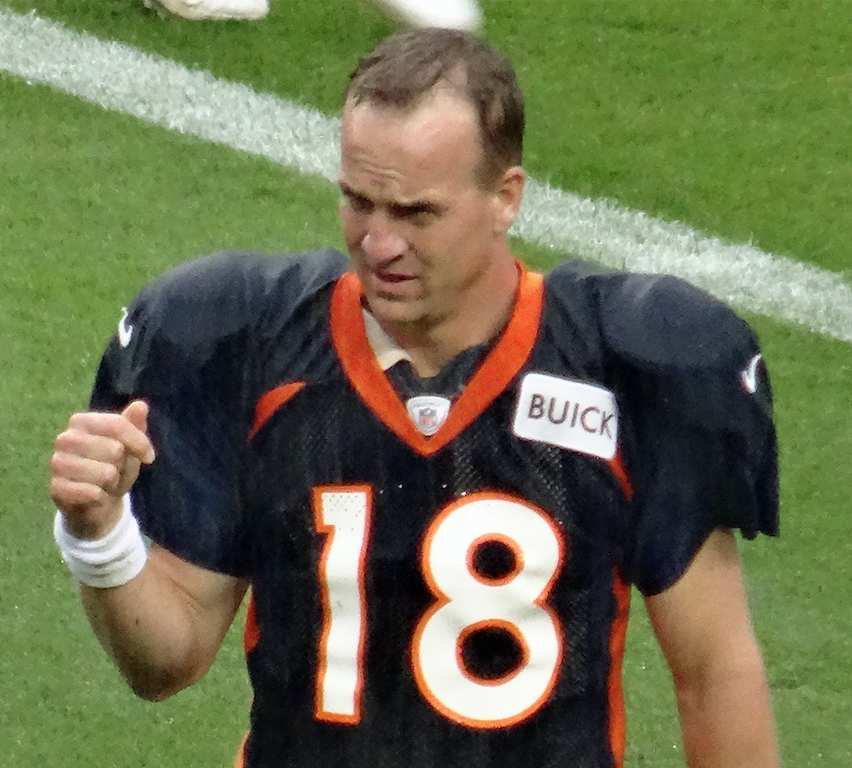 Every time you look up, Patrick Mahomes is doing something amazing. Earlier this season, he became the fastest player to record 100 passing touchdowns. He’s put up some absolute monster performances this season, perhaps none more impressive than a five-touchdown performance against the New York Jets on November 1st in which he threw for over 400 yards. Once again, he’s firmly in the MVP conversation, and he’s on pace for his second 5,000-yard season despite having been in the league for just three years now. He’s got six games left to play, and several casual Chiefs fans have been wondering if he might break some sort of record.

So what’s the most passing yards by a quarterback of a single season? Is Mahomes within reach? We did the digging necessary to find out.

The record-holder for most passing yards in a single season is none other than the great Peyton Manning, who recorded 5,477 yards during his MVP season in 2013. So in order to surpass his mark, Mahomes would need to throw for over 400 yards per game over the remainder of his schedule, which in all honesty is probably not happening.

But Peyton isn’t the only player to throw for over 5,000 passing yards in a single season. In fact, seven different quarterbacks have topped that incredible mark, and there have been twelve total instances of 5,000-yard season, with 11 of them coming in the past twelve years. Here’s the complete list, in ascending order.

Here’s a list of all quarterbacks who have managed to accrue over 10,000 passing yards in a span of two seasons: Peyton Manning, Drew Brees, Tom Brady, and Matthew Stafford. That’s it. His 2011 and 2012 campaigns are up there with the best quarterback passing seasons of all time, though the former ended in a Wild Card round exit from the playoffs, and the latter ended in a 4-12 finish for Detroit that earned them last place in their division.

It’s fair to say that the longtime Lions QB isn’t performing at his prime levels anymore, and even when he was, he was never able to carry his team past the Wild Card round. Though he’s got a shot at edging names like Drew Bledsoe, Carson Palmer, and even John Elway in terms of career passing yards by the time he eventually retires, it looks more and more as though his legacy will be marred by lack of postseason accomplishments.

Brees is the undisputed king of 5,000 passing yard seasons, and this was his first of many. Remarkably, no other quarterback in pro football history to date has managed to eclipse that mark more than once in his entire career. Brees, however, has accomplished the spectacular feat no fewer than five times. Not only that, he owns four of the top six spots on the single-season passing yards leaderboard.

Though the Saints ultimately finished with an 8-8 record that year and missed the playoffs, it clearly wasn’t for lack of talent from their QB. He was as consistent as they come throughout the year, and maxed out at 422 yards in his week nine performance against the Atlanta Falcons. He ended the season with 34 touchdowns and 17 interceptions.

Marino was the first quarterback ever to top 5,000 yards in a season, and he did it in just his second season as a pro. His record stood tall (and looked practically unbeatable) for over 30 years. Marino’s career got off to a blazing start, as 1984 was the first of three consecutive First Team All-Pro seasons for the Miami legend.

Surprisingly, Marino never came close to matching his sophomore season total for the rest of his 17-year career. His next highest total was 4,746 yards in 1986, and outside of that he never again surpassed 4,500 passing yards in a single season. There’s no doubting Marino’s historic greatness, of course, but many Dolphins fans of that era had probably hoped to see more campaigns like 1984, if only for the novelty of the yardage total.

In order to earn the all-time record for passing yards in a single season, Pat Mahomes will have to start by topping his own career high set during his phenomenal rookie season. His 50 touchdowns that season are tied with Tom Brady for the second-most in football history (though significantly behind Peyton Manning’s 55 TDs in 2013).

It’s still possible that the Chiefs sensation could top his own personal best with a fantastic 2020 stretch run, though he’d have to average nearly 350 yards per game in order to do so. Still, Mahomes has a long, long career ahead of him in the NFL, so there are plenty of chances for him to challenge Peyton Manning for the record. If nothing else, we might see him become the second player to top 5,000 yards twice.

The most recent entrant to this list, Winston is something of an enigma. Only one other quarterback in history managed to throw for more yards in the first five games of his career than did Winston (Peyton Manning, if you’re curious). Yet the high yardage totals never led to significant success for the Buccaneers, who just this season decided to move on from the former Heisman winner in favor of an aging Tom Brady.

Now, Winston’s career has hit something of an impasse. He was signed by the Saints this offseason in order to be the backup to Brees, but when the franchise icon got injured, coach Sean Peyton decided to name Taysom Hill as the starting QB over Winston. Obviously, this blocks Winston’s path to playing time, and it’ll be interesting to see if and when he gets a clearer path to the gridiron.

There’s no doubt that Roethlisberger, a future hall of famer, has shown extraordinary talent throughout the course of his 17-year career. But he owes partial credit for his otherworldly passing totals to the Steelers organization; they’ve been incredible at drafting and developing standout wide receivers over the past ten years, and Big Ben has been a major beneficiary of that.

Some names of powerhouse receivers that Roethlisberger has connected with over the years include Antonio Brown, Martavis Bryant, Emmanuel Sanders, JuJu Smith-Schuster, and now Chase Claypool. That’s not to say that Big Ben hasn’t done his part to take advantage of his embarrassment of riches, but the wideouts deserve some credit, too.

2013 was the third of three consecutive seasons in which Brees blew past 5,000 passing yards to make an incredible statement about his talent. It was also the eighth year of a twelve-year streak in which he threw for 4,000 yards, something many talented quarterbacks don’t do for their entire careers. Nearly a quarter of his throws went to tight end Jimmy Graham, who was a favorite target of Brees for many years.

Let me save you some time: if you want to read about someone besides Brees, skip ahead to the third-place finisher. The past decade was dominated by the Saints passer, and 2012 was no exception. Throughout the course of the season, he connected with fourteen different receivers. 60% of his yardage total came on passes thrown to Marques Colston, Lance Moore, and Graham, each of whom accrued roughly 1,000 receiving yards.

This is Brees’ most recent of five 5,000-yard passing campaigns, and quite possibly his last based on his steady decline over the past few years as well as a recent set of injuries. Notably, he managed to do it with a completely different core of receivers — Brandin Cooks, Willie Snead, and Michael Thomas combined for over 3,000 total yards on the receiving end of Brees’ arm. The fact that the receivers changed, and the results didn’t, should tell you all you need to know about this legend’s level of talent.

No list of incredible quarterback accomplishments would be complete without a bid from Brady, and it came during a truly fascinating year. 2011 was perhaps the football equivalent of the great home run record chase between Mark McGuire and Sammy Sosa in 1998. Both Brees and Brady jumped off to hot starts, and by December it was all but certain that both would smash Marino’s single-season passing record.

Ultimately, it was Brees who came out on top in this race, but Brady made it interesting up until the very end. And though this was a fun storyline to track throughout the year, it was ultimately Aaron Rodgers who came away with the NFL MVP award. Many fans still wonder about the voter rationale behind this, but perhaps it’s simply a reminder that passing yards aren’t everything.

We’ve finally come to the best of many excellent Brees campaigns, and this one was deserving of a spot in the record books. He started out with a bang by throwing for 419 yards in the first game of the season, and finished with a flourish by putting up a five-touchdown performance in Week 17. Brees finished the year with 46 touchdowns against just 14 interceptions, and spread the ball around admirably; seven different players caught at least 30 passes from him.

One can only imagine how miffed Brees must have felt when he shattered a nearly-40-year-old record only to have his mark edged out two years later by a single yard. That’s the way things shook out, though. Manning’s 2013 MVP season was perhaps the greatest season by a quarterback in the history of football, as he not only narrowly beat out Brees for the passing yards record, but he also obliterated Brady’s record for passing touchdowns in a single season by throwing 55 of them.

Manning connected with each of Demariyus Thomas, Eric Decker, Julius Thomas, and Wes Welker for at least 750 yards and 10 touchdowns apiece. Those players alone accounted for 4,284 receiving yards; only seven quarterbacks in the league managed that many passing yards in total during the 2013 season. Manning also threw at least five touchdowns in five different games, which no other QB has been close to replicating. His MVP campaign was truly breathtaking, and deserves to be marveled at for eternity.