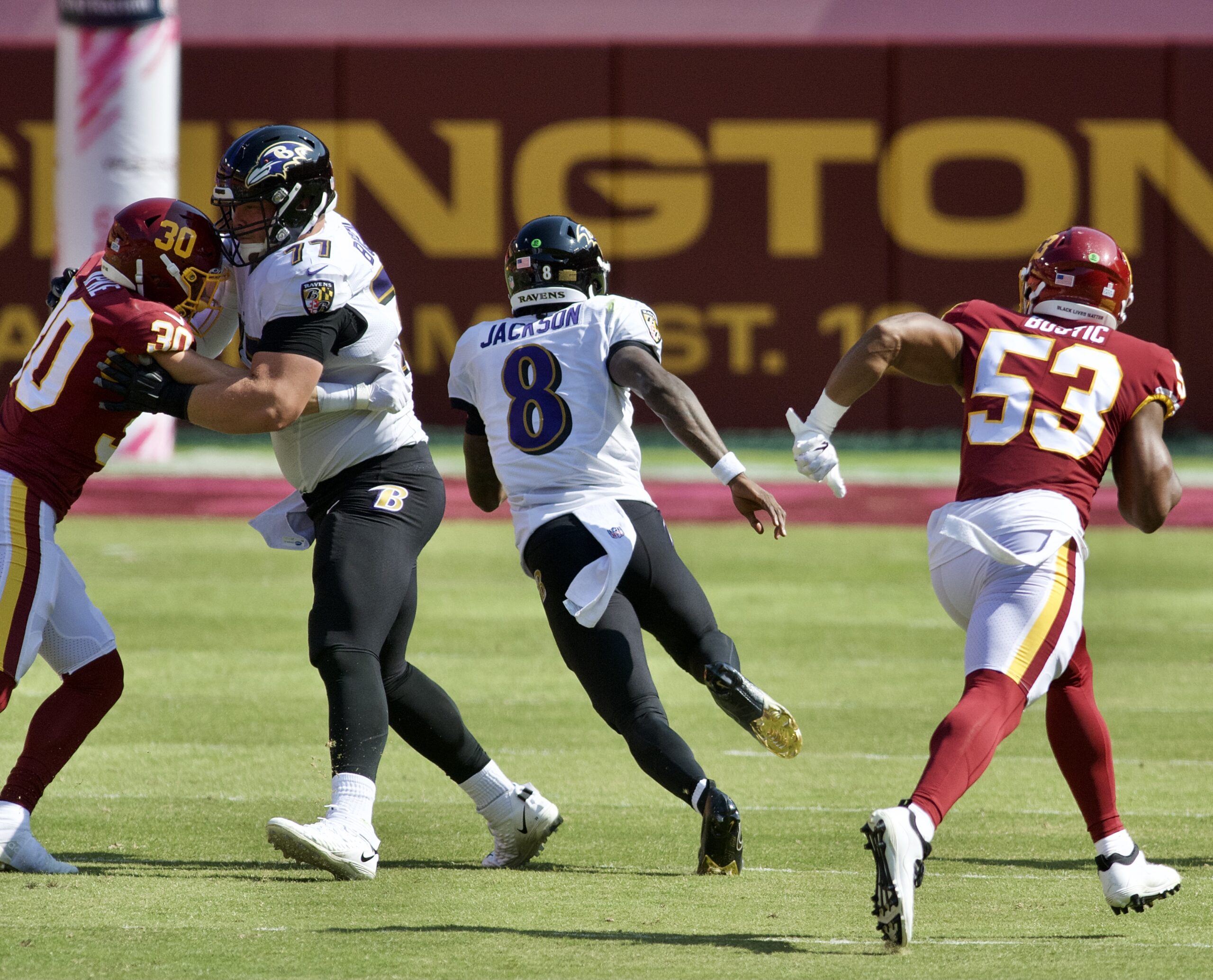 In Week 13, four different NFL quarterbacks rushed for at least 40 yards. Lamar Jackson led the way with a whopping 94 yards on 13 carries, nearly matching his passing yards total of 107. A few weeks ago, I took a look at which quarterback has the most rushing yards in a single season and found out that Jackson was the leader. So I decided to take this opportunity to see whether Jackson might also hold the single-game record in this category. I was pretty sure that 94 yards wouldn’t cut it, but I was also sure that this past week probably wasn’t his career best. So what’s the most rushing yards by a quarterback in a single game? And is that quarterback Jackson, or someone else?

Michael Vick has the most rushing yards by a quarterback in a single regular season game, dating back to at least 1950. His 173 yards against the Minnesota Vikings broke a 50-year-old record, and he also holds three spots in the top ten in this category. Colin Kaepernick holds the overall record (181 yards), which he set during a playoff game.

But Vick only holds three spots in the top ten, and Jackson accounts for one more name on the list. I decided to run down the list of the top ten regular-season rushing performances by a quarterback in NFL history, dating back to 1950.

During his early years with the Packers, Tobin Rote was carrying a crummy team almost entirely on his shoulders. Not only did he have to take matters into his own hands by running the ball himself all too often, but he actually led the team in rushing yards in 1951, 1952, and 1956. His performance style clearly embodied the age-old idea that when you want something done right, you just have to do it yourself.

Unfortunately, while he had some impressive individual performances, Rote didn’t do a whole lot of winning throughout his career. In fact, it wasn’t until his first year with the San Diego Chargers in 1963 that the former second-round pick finally celebrated a winning season, and that was also the year he earned First Team All-Pro honors. Predictably, he also posted the lowest single-season rushing total of his career by far.

At the time, it was still a pretty huge deal for a quarterback to rush for over 100 yards. Most passers couldn’t muster that type of performance during his era, but Kilmer’s 131-yard game against the Rams catapulted him into fourth place on the QB single-game rushing leaderboard at the time. Remarkably, he wasn’t even the starter for that particular game, nor did he start any other games as a rookie that year.

Kilmer had a very long career, playing 16 seasons for the 49ers, Saints, and Redskins. But by today’s standards, it was somewhat mediocre. His rookie campaign was probably the most interesting, considering he rushed for 509 yards that year and scored 10 touchdowns on the ground, and completed just 19 passes for 286 yards. His Pro Bowl campaign in ‘72 was his best overall performance.

Allen’s performance against the Dolphins was impressive, especially considering he was only a rookie at the time. It was the second consecutive week in which he set a franchise record for rushing yards, and it ended in a loss that the Bills didn’t deserve. A taunting penalty against defensive tackle Jordan Phillips set up a late-game touchdown for Miami, and a missed catch by Zay Jones in the game’s final minute put the nail in Buffalo’s coffin.

That hasn’t slowed down Allen’s career trajectory, though. The Wyoming product is on the outskirts of this year’s crowded MVP race, and he continues to rack up solid rushing totals each and every week. In less than three seasons as a pro, Allen has managed to compile nearly 1,500 rushing yards, which is more than Tom Brady and Drew Brees have in their entire careers.

This game was one of the highlights of Griffin’s impressive rookie season. He averaged more than ten yards per carry, and his performance that day brought his season rushing total to a franchise-record 379 yards — by the middle of October. More than half of his yards came in the form of a 76-yard touchdown run, which was the longest in the NFL in over 15 years.

Unfortunately, injuries entirely derailed the promising number two overall pick’s career. Though he compiled over 3,000 passing yards and at least 16 touchdowns in each of his first two seasons, he hasn’t been able to put up any semblance of quality numbers since. RG3 is currently the backup quarterback for the Ravens, and lost to the Steelers in his lone start this year.

This was Vick’s first football game since breaking his leg prior to the start of the 2003 season, but he didn’t seem to have a very difficult time shaking the rust off. That leg was healthy enough to carry him 141 yards on 14 attempts in a game that Vick practically won single-handedly. The win also ended a three-game losing streak for the Falcons.

Though his career and his image will always be somewhat marred by the jail time he served for his role in a dogfighting operation, Vick was the greatest rushing quarterback of all time. His 6,109 career yards on the ground are the most of any quarterback in history by a wide margin, and though Cam Newton and Lamar Jackson may catch him eventually, that record is nonetheless an incredible accomplishment.

This one might be considered cheating, because like Rote, Trippi was primarily a running back throughout the course of his career, not a passer. Still, he was listed as a QB on the roster, and this one game accounted for nearly 30% of his rushing yards over the course of the season. Unlike in Griffin’s case, this wasn’t a game where the bulk of his yards came on one run, either. His longest rush was just 32 yards.

Trippi was a hot commodity at the time he entered the league. The Cardinals selected him first overall in 1945 as a “future pick”, and he ended up signing a $100,000 contract which was a record at the time. As a part of the team’s “million dollar backfield”, Trippi rushed for at least 400 yards in each of the first four seasons of his career, which at the time was impressive.

Rote is the only quarterback in the history of the NFL to rush for at least 130 yards twice in the same season, and remarkably those games came just four days apart. It’s also interesting to note that this game and Trippi’s performance detailed above both came against the Chicago Bears less than a month apart, which must have been embarrassing for their run defense.

Fascinatingly enough, Kaepernick actually rushed for more yards than he threw for in this particular game. Though he managed to rush for 151 yards on seven attempts, he completed just 15 of his 24 passes for a mere 114 yards that day. The bulk of his rushing yards came on a single, spectacular 90-yard rushing touchdown that seemed more like an opportunistic dash than anything planned.

It’s impossible to talk about Kaepernick’s career without at least mentioning his activism and noting that he’s been blackballed by the entire league for it. Should any team decide to hire him again at some point in the future, they’d be getting a quarterback with 2,300 total rushing yards across just six professional seasons, to go along with 13 rushing touchdowns.

Jackson’s performance made him the first player in NFL history to rush for at least 150 yards and throw for at least 200 yards in the same regular season game. Bengals coach Zac Taylor described the feat as “the most frustrating thing for a defense”, and described Jackson as “one of the rarest [athletes] I’ve seen in person”. Jackson’s 152 yards came on 19 attempts, proving that he’s never afraid to take the ball himself.

When all’s said and done, it’s quite possible we’ll be talking about Jackson as the greatest rushing quarterback by a wide margin. In less than three full professional seasons, the former first-rounder is already nearly halfway to Vick’s career mark, and he’s yet to reach his 24th birthday. Jackson’s rushing total will be something fascinating to watch over the next decade.

The only person alive to ever come within 20 yards of Michael Vick’s single-game rushing record is… Michael Vick. Unfortunately, a 166-yard rushing performance wasn’t nearly enough to get the job done against Drew Brees and the Saints that day, as they ended up losing by a score of 31-13. Part of that is because Vick completed just nine of his 24 passes for less than a hundred yards, but five of those incomplete passes were pretty egregious drops by his receivers.

When he set this record in the midst of his sophomore season, Vick was crushing a 50-year old record by more than 20 yards. He managed to do so on just ten rushing attempts, the most glorious of which was a 46-yard touchdown run in sudden death overtime that absolutely stunned the Minnesota crowd. It was Vick’s second rushing touchdown of the day, meaning he single-handedly accounted for nearly half of Atlanta’s points.

The most mind-blowing aspect of Vick’s performance in this particular game was that he accounted for 346 of the Falcons’ 379 offensive yards that day. To those of you who did that math quickly, you’re right: somehow Vick had exactly as many passing yards as he did rushing yards. It certainly wasn’t a flawless game on his part, considering he threw an interception and lost two fumbles, but it’ll live in the record books for a long time.