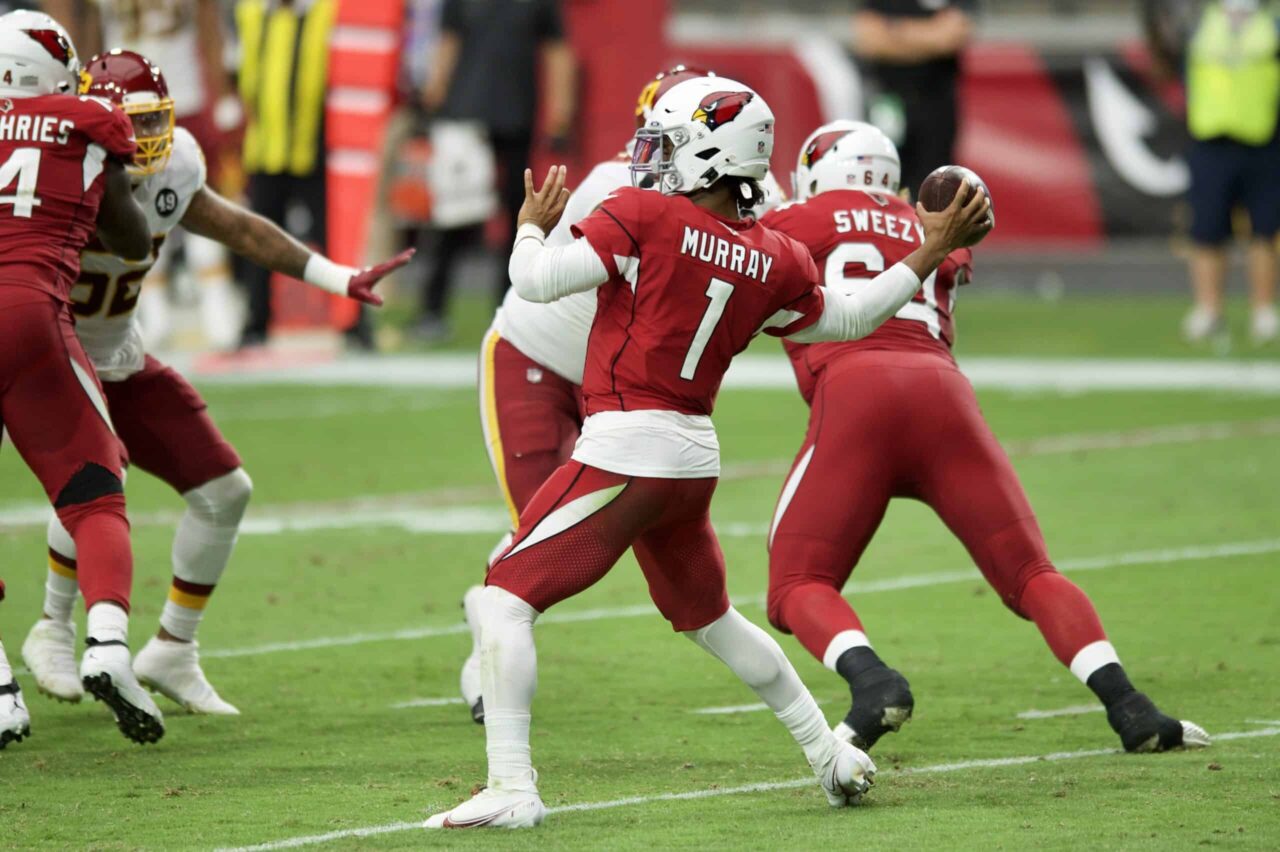 As of Tuesday, October 20th, 2020, Kyler Murray of the Arizona Cardinals had 370 rushing yards to his name after his first six games of the season. That puts the sophomore quarterback on pace to have one of the best rushing seasons by a quarterback ever. The dynamic University of Oklahoma product posted 544 rushing yards in his rookie season, and looks to have gotten a lot more bold in 2020.

Murray is currently on pace for 987 yards on the ground this year, and that kind of versatility has made him a nightmare for opposing defenses. He’d have to find a whole new gear in order to break the single-season QB rushing record, but he looks like a shoo-in for a spot in the top ten.

To date, only 11 quarterbacks have ever rushed for at least 700 yards in a single season (which Murray is on pace to accomplish by the time Week 13). Let’s run down those seasons in ascending order, with the record holder listed last.

Anyone who’s watched Cam Newton play probably isn’t surprised to see his name on this list. He keeps opposing defenses guessing thanks to his ability to take matters into his own hands when the chips are down. Although his tenure with the New England Patriots isn’t off to a great start, Newton certainly earned the respect of the league based on what he did with the Carolina Panthers. 2011 was actually his rookie season, too, and those 706 rushing yards set a rookie record at the time, albeit one that lasted a whopping one year. His 14 rushing touchdowns are also a record that nobody else ever came close to matching.

Newton one-upped himself after his rookie campaign by putting up an even better rushing season, though his titanic efforts still couldn’t help the Panthers to a winning season. Their 7-9 record was a one-game improvement over the prior year, though, and thanks in large part to Newton they’d go on to have some stellar seasons in the years to come. Interestingly enough, Newton didn’t beat his rookie mark in this category by rushing more often; he made just one more attempt than he did the year before, meaning improved on his total by having more efficient runs overall.

I promise you this list isn’t all Cam Newton. In fact, this season was his best rushing total to date, meaning you won’t see him again moving forward. Still, the fact that he makes three appearances in the top 11 proves that his rookie season was no fluke; Newton is truly one of the greatest rushing quarterbacks ever to play the game. 2017 saw the playmaker lead his Panthers to second place in the NFC South, though they ultimately fell to the Saints in the Wild Card round by a score of 26-31. During that game, Newton rushed for 37 yards on 8 attempts.

Vick’s another one of the greatest rushing quarterbacks ever to set foot on a gridiron, and he actually held the record in this category at one point (though not with this particular season). He actually ranks third all-time in career rushing yards by a QB, and would probably be even higher on that list if he hadn’t famously spent time in jail for his role in a dog fighting operation. Vick’s sophomore performance earned him a 81.6 QBR along with his first pro bowl selection.

The former number two overall pick posted a monster rushing season his rookie year, and one that shattered the rookie QB rushing record set by Newton the year before. That record remains unbroken to this day, though several of his ligaments do not. Football fans will always wonder what Griffin’s career might have been had it not been derailed by injuries, but he’s still got at least one novelty record that seems likely to stand for quite some time. It’s worth mentioning that 2012 is the only year on this list in which multiple QBs put up a top ten rushing season.

Some of you were probably waiting to see if Russell Wilson had a place on this list. His third season in the NFL was his best to date in terms of rushing yards, and thanks in part to his legs he was able to lead the Seahawks to the Super Bowl for the second year in a row. They failed to repeat as champions, however, as Wilson famously threw an interception to Malcom Butler from the one yard line, at a time when the Seahawks had a chance to score the game-winning touchdown (and one of the game’s best running backs in Marshawn Lynch). Although Wilson is currently having a career year, he doesn’t seem likely to post another top rushing season; he’s instead riding some prolific passing performances.

This obviously isn’t the first time we’ve seen Vick on this list, and it won’t be the last. The former Atlanta Falcon had just received a record-setting $130MM contract extension, and made good on it in part by running for an average of 60.1 yards per game. The Falcons ended the season with a record of 11-5, and went on to appear in an NFC Championship game that they ended up losing to Donovan McNabb and the Eagles.

It’s actually surprising that Rocket Man doesn’t appear more often on this list; he’s the second-best rushing quarterback of all time. Cunningham’s 4,928 career rushing yards trail only Cam Newton and Michael Vick among quarterbacks. For perspective, only 147 running backs have posted higher career totals. He didn’t just make things happen on the ground in 1990, either; Cunningham accrued 3,466 passing yards to go along with 35 total touchdowns, putting this season in the conversation for one of the greatest QB campaigns of all time.

In truth, Bobby Douglass is something of an anomaly on this list. He was never a truly great quarterback in any regard. In fact, he was probably only running the ball so often in ‘72 because he wasn’t that great at throwing it; Douglass only managed a completion percentage above 50% one time in his career (1977, 51.6%). That’s probably one reason why he ended his career with a record of 16-36-1. Nevertheless, Douglass is the only quarterback to ever post more than 700 rushing yards while playing 14 games or less, and he’s stood alone in that regard for nearly 50 years now.

In 2006, Vick became the first QB ever to rush for 1,000 yards in a single season (and then promptly rushed to jail the following summer). This campaign, however, is proof that it takes far more than dominant rushing numbers from a QB to win games— despite Vick’s gaudy total, the Atlanta Falcons finished with a record of just 7-9 and didn’t even make the playoffs. Because running back Warrick Dunn also rushed for over a thousand yards, the 2006 Falcons are the only NFL team in history to have two 1,000-yard rushers and still post a losing record. Nonetheless, Vick’s performance was impressive; he broke a 34-year-old record, and one that wouldn’t be broken again until 2019. Ultimately, he’d go on to become the greatest rushing QB of all time, totaling 6,109 yards over the course of his 13 seasons in the NFL.

Lamar Jackson’s sophomore rushing performance absolutely shattered the single-season QB record, and was one of many reasons he became the just second unanimous MVP in the history of the NFL. One stat that stands out is his 80.4 rushing yards per game; no other QB on this list averaged even 70. His whopping 176 rushing attempts also shattered the previous record of 147 which, incidentally, was set by Lamar Jackson in 2018. For those of you who are curious, he’s already rushed for 346 yards in 2020, which puts him on pace for 923 yards on the season. If he keeps up these habits over the long term, Jackson could potentially annihilate Vick’s career rushing record and accrue a lifetime total even higher than famous running backs like DeMarco Murray and Arian Foster.