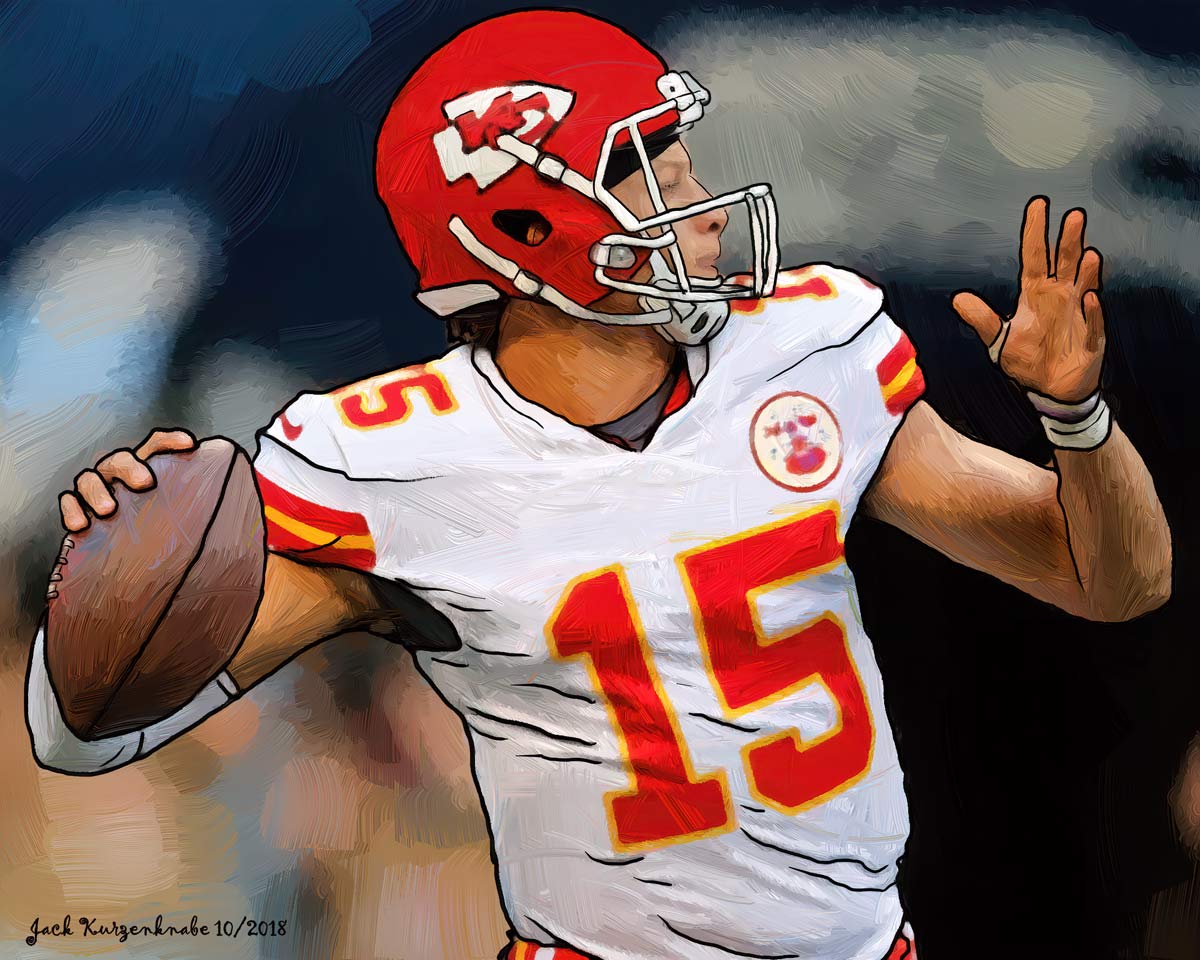 Through Week 9 of the 2020 season, scoring in the NFL is higher than any season since the 1970 merger. Some might say that’s a result of poor defense across the league, but considering how far the sport has advanced in the past 50 years, it seems unlikely that defenses have taken steps backwards since then. Far more likely is the theory that league offense is better than any year in NFL history, and a lot of that offensive success can be attributed to the talented quarterbacks flooding the league.

Consider this: passers this season have already thrown for 469 touchdowns. If that figure continued to climb at its current pace, this year’s class of QBs would break the current record of 847 by a whopping 38 touchdowns. Total league passing yards are also on pace for the third-highest season of all time. Those are remarkable stats, especially when you consider the marginal impact that COVID-19 has had on the 2020 season thus far.

It isn’t just the talent and record passing statistics that make 2020 the Year of the Quarterback, though. In addition to the high scoring, there’s a slew of captivating storylines that fans are following on the edge of their seats. There are almost too many to count, so rather than recap them all, I’ve chosen four of my favorites to delve into in detail. Check them out below.

The Battle for the All-Time Passing TD Record

No matter what happens this year, either Tom Brady or Drew Brees will be in possession of the all-time record for most passing touchdowns by a quarterback at season’s end. One of the big questions in football right now is, which of those living legends will edge out the other this year? More importantly, who will hold the record when both QBs ultimately retire? It’s worth mentioning that they probably don’t have much time left in the NFL, as they’re currently the two oldest active pro football players.

It’s not as though this is an entirely new storyline. Ever since Brees eclipsed Peyton Manning’s record last season, it’s been obvious that either he or Brady will ultimately hold an incredible record that’ll be tough to break. Since that day, possession of that prestigious record has switched hands several times, and neither player seems likely to call it quits any time soon.

But what makes this story even more gripping is the fact that, for the first time, both of the future Hall of Famers are playing in the same division. Many wondered at the beginning of this season whether leaving the Patriots was a huge mistake for Brady, but since joining Brees in the NFC South this year, he’s continued to perform admirably (for the most part, anyway). More importantly, it set the stage for them to face each other twice, and the record chase added an additional element of intrigue to both games.

Brees and the Saints crushed the Bucs this past weekend by a score of 38-3, handing Brady the most lopsided loss of his entire career (including college football!). During that matchup, Brees took sole possession of the all-time passing TD record by throwing four of them while his defense held Brady to zero scores and three interceptions. But as the 2016-2017 Atlanta Falcons know all too well, Brady is more than capable of staging an epic comeback. Expect more drama as two of the greatest quarterbacks of all time continue to duke it out for a place in the almanac.

An Epic Class of Rookie Quarterbacks

Regardless of rooting interests and biases, most longtime football fans and pundits agree on at least one thing: we haven’t seen a class of rookie quarterbacks this talented since at least 2004. Joe Burrows, Tua Tagovailoa, and Justin Herbert are all budding legends, and while it’s still probably too early to say this for sure, they look to have changed the trajectories of their respective franchises.

If you think that’s bold, you probably haven’t watched any of them play. Burrows, for instance, is quite possibly one of the best rookie quarterbacks ever to set foot on the gridiron. The Cincinnati phenom already set a new record for most completions by a rookie QB in a single game by hitting his receivers 37 times against the Browns in Week 2. The number one overall pick of the 2020 draft is currently on pace for 4,544 total passing yards, which would shatter the current record set by Andrew Luck in 2012. It’s also worth mentioning that he holds a stellar QB rating of 91.4 through his first eight career games.

Accuracy and consistency from guys like Burrows are awesome, but if you’re the type of person who loves watching deep bombs from big buns, look no further than Chargers rookie Justin Herbert. While the jury’s still out on what his nickname will be, he’s already carved a place in the hearts of the club’s new Los Angeles fan base by making big plays when it counts, like this 60-yard missile. Herbert has big shoes to fill in terms of living up to what Rivers accomplished for the Chargers over the course of his long career, but he looks comfortable and confident on the gridiron and has earned a lot of hype.

Although Tagovailoa has been in the league for the shortest amount of time among this class of rookie QBs, he’s certainly made a statement in the early-going. Through his first two games, the Samoan prospect has settled concerns about his hip injury by connecting on 65% of his passing attempts and leading the Dolphins to wins in both of his starts thus far. Though he’s long been in the public eye since leading the University of Alabama to a national title, draft day concerns about his injury history caused him to fall to number five overall, and Dolphins fans couldn’t be happier about it. The fact that he’s the first left-handed quarterback to throw a pass in the NFL in nearly four years also added a level of intrigue to his debut. Overall, his early QB rating of 103.8 has turned a ton of heads, and fans in Miami will hope he can keep up something close to that pace throughout his career.

These three quarterbacks are not only staging a compelling Rookie of the Year race, but they’re also establishing themselves as a class that pundits will be talking about for years. To this day, whenever someone talks about the year 2004 in the NFL, many fans still immediately think of Roethlisberger, Rivers, and Manning. If Burrows, Herbert, and Tagovailoa keep doing what they’re doing, they’re likely to create a similar effect, and remain linked to one another in conversation for the next 15 years.

In any given year, a quarterback is more likely to be the MVP than any other position. But in 2020, the race is even more crowded with stellar QBs than usual. Russell Wilson, Pat Mahomes, and Aaron Rodgers lead the way at the moment, but Ryan Tannehill and Josh Allen remain in the conversation despite cooling off after blazing hot starts.

Out of the gate, it looked like Wilson was going to run away with the award. With two five-touchdown performances in the first three weeks of the season, it seemed like he’d found an entirely new gear as a football player. But after a pair of average performances in Week 7 and Week 9 led to Seattle losses, he’s given other contenders room to catch up to him in the race.

Rodgers currently leads all QBs in the NFL with a sky-high passer rating of 117.5. His Week 9 performance, in which he threw for 305 yards and four touchdowns against the 49ers, catapulted him into a neck-and-neck contention with Wilson and Mahomes. Perhaps the most remarkable thing about Rodgers is how accurate he’s been for the Packers this season; the two-time MVP has thrown zero interceptions in eight of his nine starts so far.

Mahomes is perhaps the frontrunner for the award at the moment after becoming the fastest player to 100 touchdown passes in NFL history, eclipsing Dan Marino for the impressive (if ancillary) record. Though he doesn’t lead the league in very many QB stats, he’s top three in passing yards (2,687), touchdown passes (25), and passer rating (115.9), and continues to make his case by doing one simple thing: consistently playing solid football. His Chiefs are 8-1, and look to be Super Bowl contenders yet again this year.

Allen had been slipping a bit in recent weeks, but thrust himself back within reach of the MVP award by taking down Wilson and the Seahawks in Week 9. While he’s been inconsistent this season, he’s put up some absolute monster performances that have buoyed his MVP case just enough to keep him in the conversation. The same could potentially be said of Tannehill, whose Titans have the same team record as Allen’s Bills (7-2) thanks, but could potentially blame their two losses in part on a pair of rough showings from their quarterback in Week 7 and Week 8.

Regardless of who you think is in the lead for the MVP award, one thing’s for sure: there’s no obvious frontrunner at the moment. Even more concrete is the notion that the picture could easily change next week, the week after, and for the rest of the season. At least five quarterbacks still have an easy path to being named Most Valuable Player at season’s end.

While it’s safe to say that Burrows and his Bengals aren’t winning anything this season, there are still three teams duking it out for first place in the AFC North: the Steelers, Ravens, and Browns. At the moment, Roethlisberger and the Steelers have a fairly comfortable two-game lead, but based on who his competitors are, that could still change by season’s end.

Thanks in part to otherworldly passing from Roethlisberger, some people consider the Steelers to be Super Bowl favorites right now. And though he’s not necessarily playing at his peak level, he’s still finding a way to get the job done every week. Pittsburgh is 8-0 right now, and it looks like Big Ben will give them every chance he can to plow their way to an undefeated season.

Lamar Jackson is another player who isn’t necessarily having his best season, but has still managed to give his Ravens a chance to win every week. The 2019 MVP has yet to top 300 passing yards in a game this season, but it’s safe to say that Baltimore wouldn’t be doing what they’re doing if they didn’t have him behind center.

Meanwhile, Baker Mayfield might lead the Browns to their first winning season since 2007. Although he’s been wildly inconsistent this season and recently suffered the loss of his best receiver, Odell Beckham Jr., to a season-ending ACL injury, he’s put up a couple of brilliant showings. For instance, his five-touchdown game against Cincinnati in Week 7 saw him earn a passer rating of 135.6, giving Cleveland fans hope in his potential to carry them to the playoffs even without Beckham Jr.

So while the AFC North title is the Steelers’ to lose at this point, it’s exciting to see a division race in which three talented quarterbacks are pushing hard to help their teams grind out tough wins. This division is going to be a fun storyline to watch for the remainder of the season.

Quarterback has always been the most notable position in football. But this year, QB storylines are absolutely dominating NFL coverage. People will remember 2020 as the Year of the Quarterback for a long, long time.