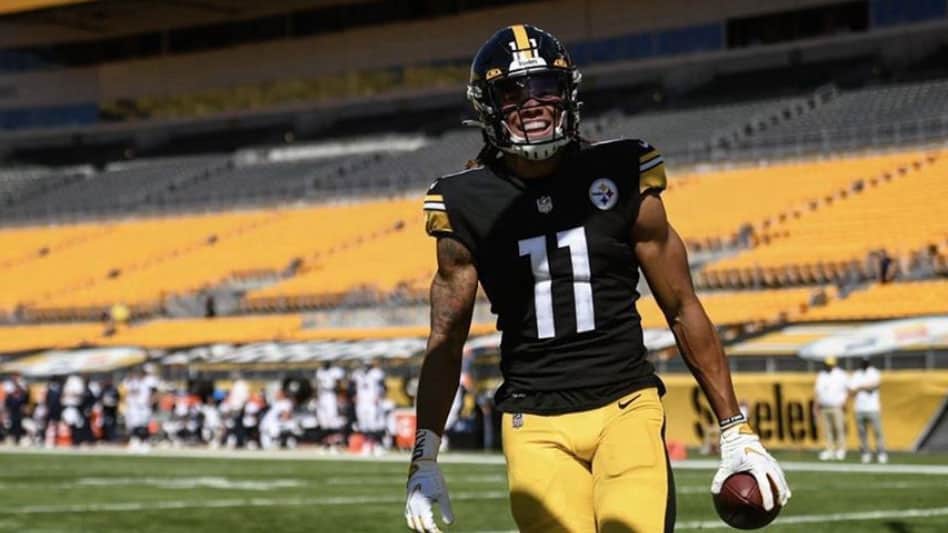 The Steelers selected Chase Claypool in the second round of the 2020 NFL Draft (49th overall) after he finished out his senior season by helping Notre Dame win the Camping World Bowl. But the Canadian-born wideout didn’t become a household name until Sunday, October 11th, when he set a Steelers rookie record by scoring four touchdowns en route to a Pittsburgh victory over the Philadelphia Eagles. Since then, his popularity with Steelers fans (and fantasy football players) has exploded, to the point where he’s now marketing Mapletron merch on his Twitter account.

The awesome and unique nickname Mapletron comes from a combination of two things. The first is Claypool’s Canadian heritage, where maple pervades the culture so thoroughly that it’s literally a part of their flag. The second is his comparisons to Calvin Johnson (Megatron), who’s widely regarded as one of the greatest wide receivers of all time. Here’s a more in-depth look at how this moniker was born.

Although the nickname Mapletron wasn’t slapped on him until 2020, Claypool’s Canadian citizenship has long been a part of his identity on the football field. After putting up ridiculous numbers in British Columbia (including over 2000 total yards and 30 total TDs), he was recruited by Notre Dame. During his freshman year there, he managed to catch five passes and show just enough talent to create some hype around him headed into the 2017 season.

A writer at SB Nation predicted that he would become a staple in the Fighting Irish offense, and dubbed him “The Maple Bandit” for his Canadian origins and blinding speed. Claypool would go on to carry that nickname throughout the remainder of his college career.

When he arrived at the combine, Claypool measured just over 6’4” and weighed in at 238 pounds. That frame prompted some scouts and analysts to ponder whether the Notre Dame wide receiver might be better suited for a tight end position, but Claypool quickly put those concerns to bed with his performance.

For his official 40-yard dash, Claypool ran a 4.42. According to @NFLResearch on Twitter, that put him in unique company; since 2003, only one other wide receiver who weighed at least 235 pounds and was 6’4” or taller managed to run the 40 in under 4.45 seconds. That wide receiver was the legendary Calvin Johnson, who went on to have a Hall-of-Fame career.

Long ago, Johnson was nicknamed Megatron by teammate Roy Williams due to the enormous size of his hands (which apparently likened him to the famous Decepticon). Because of his similar size and combine performance, Claypool was dubbed Mapletron at that combine, though the nickname didn’t stick firmly until a bit later on. Ultimately, the Steelers made him the first Canadian to be drafted higher than the third round since Danny Watkins in 2011.

In early May of 2020, another SB Nation fan site (Behind the Steel Curtain) decided that it was time for Steelers fans to pick a nickname for their new second rounder and stick to it. The author researched existing monikers and came up with a couple of new ones, then ultimately created a poll that asked fans to choose between four options: Mapletron, The Maple Bandit, Air Canada, and Deadpool. 383 readers chose Mapletron, which accounted for nearly 50% of the vote.

Per an article from the Aldergrove Star, Claypool caught wind of the poll and appreciated the comp to Calvin Johnson. He even told his teammates about it, though they apparently found the nickname kind of funny rather than cool. After exploding into relevance in Week 5, though, Claypool doubled down on the nickname by commissioning a line of Mapletron merchandise. If the former Canuck continues to burn opposing cornerbacks and dominate on the field, that nickname is going to stick around like syrup.