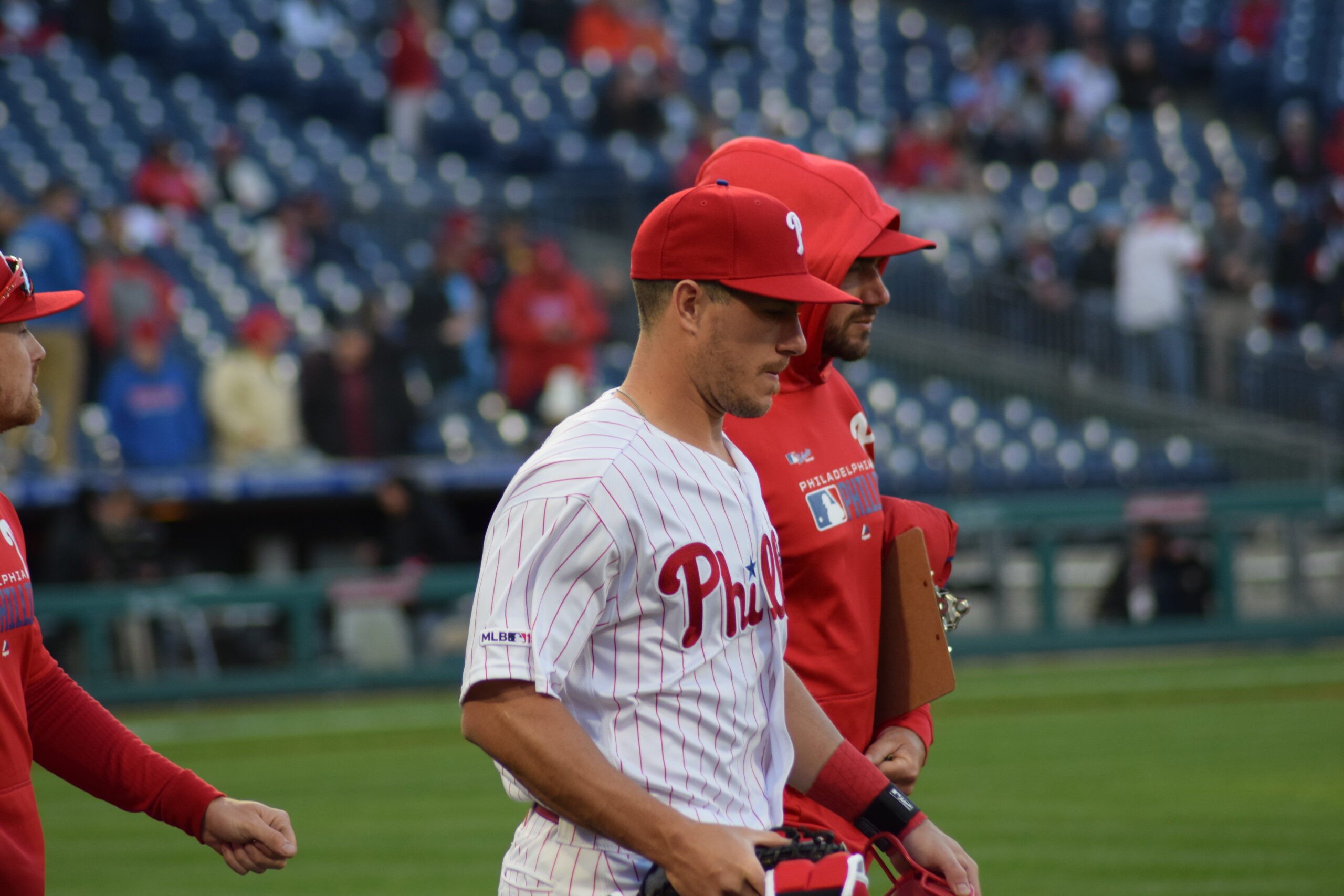 It’s now been over a month since the final game of the World Series, and only eight out of 242 eligible free agents have signed new major league contracts. Two of those deals are the result of Marcus Stroman and Kevin Gausman accepting one-year qualifying offers. In fact, not a single pact signed so far is longer than one year. Sure, we won’t see another pitch thrown until April, but pitchers and catchers will report to spring training much sooner than that. So what gives? Why is MLB free agency moving so slowly in 2020?

The biggest reason for the painfully slow 2020-2021 offseason is that MLB revenue dropped significantly this past season due to COVID-19, and don’t seem ready to commit to the salaries players are asking for. However, it’s almost certainly not that simple. There are several other factors at play here, and those factors include both recent trends in baseball as well as other intricacies of the market specific to this offseason.

You’ve lived this story for long enough to know what happened. A novel coronavirus swept the world, and states began to ban large gatherings in order to curb the spread. Not only did MLB lose six months of ticket sales, but they lost nearly all forms of revenue for two-thirds of the season, since the first game wasn’t played until late July. All told, the league claims to have lost around $3.1 billion in 2020.

There’s a lot to unpack in regards to that enormous figure. To put things in some sort of perspective, the 30 major league baseball teams were collectively worth something in the range of $55 billion headed into the 2020 season, though of course most of that value is illiquid. Still, if each franchise is worth an average of $1.85 billion, and each owner lost about $103 million on average in a COVID-shortened season, one might imagine that those losses wouldn’t necessarily qualify as devastating. These owners are billionaires, after all, so it’s not as though their quality of life will be significantly impacted by a down year, just as long as they bounce back in 2021.

The caveat, though, is that a 2021 rebound isn’t necessarily a guarantee. COVID-19 is currently more devastating than ever before, with new cases and hospitalizations at an all-time high headed into a dark and uncertain winter. There’s reason for optimism surrounding a few promising vaccines, but until the USA has a concrete plan for distribution, the future of large public gatherings is cloudy at best.

That uncertainty might be a major factor driving the offseason’s pace. It stands to reason that owners (and GMs) might want to wait to learn more about the country’s public health outlook for next year before committing significant money to players over the long term. The sport survived a down year, but it took organization-wide payroll slashing and massive layoffs in order to do so. There’s no telling what type of impact a second consecutive season of huge losses could have, and the last thing owners want is to be dealing with those ramifications while juggling a new gaggle of long-term guaranteed contracts.

This isn’t necessarily as big of an issue in 2020 as it has been in recent years, but there are a handful of teams in baseball that won’t even pretend to care about winning in the next year or two. Teams like the Pirates, Royals, Tigers, and Orioles seem more interested in competing for a top draft pick in June of 2022 than competing for a championship in 2021. Teams like the Rockies and Rangers could join those ranks based on their recent finishes and steep competition in their divisions.

So what does this have to do with a slow-moving free agency? If a team is content to lose for the next year or two, they aren’t going to sign a big ticket free agent and pay them to make the team better. What this means is less competition for player services, which results in fewer bidding wars and more patience waiting to see if price tags drop.

3. A Wealth of Great Trade Candidates

One additional side effect of teams tanking across the past several years is that a wealth of excellent trade candidates have become available, many of whom have come with multiple seasons of team control. That’s once again true in terms of players like Danny Duffy of the Kansas City Royals, but what stands out about this particular offseason is the wealth of contenders who have expressed a willingness to deal players of significant caliber.

Take Francisco Lindor, for instance. Though the Cleveland Indians have enjoyed eight consecutive winning seasons (the past six of them with Lindor at shortstop), they’re all but certain to deal him this offseason due to his waning team control and perennial unwillingness to pay top dollar for the services of any great player. He’ll come with a high price tag in terms of his arbitration salary and the prospects a team will have to fork over in order to pry him out of Cleveland’s hands, but he’s destined to move.

Lindor’s extraordinary talents are far beyond those of free agent infielders such as DJ LeMahieu, Didi Gregorious, Andrelton Simmons, and Marcus Semien. It makes sense, then, that players might be pursuing a trade for him as their Plan A, and wait to see where he ends up before making a serious run at signing one of the aforementioned players. Add in the fact that Kris Bryant, Trevor Story, Eduardo Escobar, Miguel Andujar, and even Nolan Arenado could also potentially be on the move, and suddenly there’s a pretty solid theory as to what’s holding up the market for free agent infielders.

This could also explain the lack of action on free agent outfielders such as George Springer, Marcell Ozuna, and Joc Pederson, considering the fact that Starling Marte and J.D. Martinez might be available in trades. And though Trevor Bauer is a unique prize at the top of the free agent market, teams in need of pitching might consider serviceable trade options such as Lance Lynn or Duffy.

4. The Inefficiency of Free Agent Spending

Teams have long known that dollars on the free agent market don’t go nearly as far as dollars spent on other methods of player acquisition, such as the amateur draft and international free agent signings. With new waves of analytics washing over the sport year after year, teams are learning more and more that deals guaranteeing a player an exorbitant number of years almost always turn out poorly.

Whether or not that’s a major contributing factor to this offseason in particular is up for debate. After all, it’s not likely that teams suddenly figured this out just yesterday. In fact, many pundits also floated this theory during an equally sluggish 2017-2018 offseason, when five of the top ten free agents didn’t sign until February. But the days of guaranteeing a player tens of millions of dollars per year into his late thirties seem to be waning swiftly, and it’s all but certain that we won’t see any deals of that ilk this winter.

This is another theory that was posed as to why the 2017-2018 free agent market took so long to shake out, particularly since MLB had recently implemented much steeper penalties for exceeding it. The (admittedly circumstantial) evidence that it’s affecting this particular offseason is eyebrow-raising.

We can start by taking a look at the one team that’s already set to exceed the $210 million luxury tax threshold next season: the wealthy New York Yankees. Though they seem to have virtually limitless funds, they’ve shown some level of discipline in recent seasons in regards to the CBT, and it’s doubtful they’ll shift gears this winter. So although they might be seen as solid bets to re-sign DJ LeMahieu or Masahiro Tanaka, bring back Didi Gregorious, or go hard after Trevor Bauer under most other circumstances, there’s a significant barrier preventing them from doing so.

The likely loss of the free-spending New York Yankees from the top tier of the market stings for the best free agents available; these high-caliber players perennially rely on a limited pool of affluent suitors to engage in bidding wars that drive up their price tags. To make matters worse, the Red Sox, Cubs, Angels, Dodgers, and Astros are all within $35 million of exceeding the luxury tax threshold themselves. So signing an elite player such as J.T. Realmuto or Bauer would handcuff them in terms of flexibility to fill other roster holes in the offseason, or acquire high-priced talent at the trade deadline. If you’re a free agent, anything that places these types of restrictions on your wealthiest suitors is seriously bad news for you.

Because of the 2020 revenue losses for baseball, we’re highly likely to see an unusually high number of arbitration-eligible players get non-tendered in the coming days. It’s sure to be a widely-executed method for smaller-market owners to clear money off the books, even if they’d have almost certainly retained those players under normal circumstances. In fact, we’ve already seen one big-name player join the free agent by surprise when the Indians cut Brad Hand, their most talented reliever across the past three seasons.

If I’m a GM, I’m definitely waiting until after the non-tenders are over and done with to take any serious action on the free agent market, because I want to see what kind of surprise talent becomes available first. I have zero doubt that most GMs are doing exactly that. For instance, if a player like Tommy Pham suddenly becomes available, I might seriously consider him as a value add over a proven commodity like Springer or Ozuna. Or, if the Yankees cut Gary Sanchez in order to get below the CBT threshold, he might be worth exploring as an alternative to Realmuto’s high price tag.

This list certainly isn’t the be-all end-all answer to the question post in the title of this piece. After all, it’s nearly impossible to know everything that’s influencing MLB front offices at any given time. But each of these reasons make plenty of sense, and collectively they probably account for the majority of the impact on this offseason’s pace.